The Channelwood age was an Age written by Atrus.

Ages ago, humanoids lived peacefully on the surface of the island while the tree-dwellers lived among the trees, high above the ground. As a result, the two peoples didn't interact.

One of the frequent tremors quickly grew to unprecedented levels and the island started sinking slowly into the sea. The humanoids sacrificed themselves (although it's unclear how) in order to stop the collapse and many died. The only place left for those who survived were the trees but for some reason they eventually all died out. The tree-dwellers worshiped the humans as heroes or gods, perhaps because of that self-sacrifice to save the island. The last human survivor dwelt among the tree-dwellers, and they were expecting for another like him to come.

Atrus gave this Age its name from its conception. He first linked at night and decided to sleep. He was awakened by strange noises by a group of the Tree-Dwellers. Once they saw him, were surprised and then fell to their knees worshiping him, and then guided him (with enthusiastic hand motions) through the passageways to a ladder that led up to their village. At sunset they led him to an enormous hut, that of their leader, and next to him was a very old being, the last survivor of the Channelwood humanoids, who surprisingly could speak Atrus's language. At night the tree-dwellers gave Atrus a bed.

The following days he realized that the old humanoid was treated like a god, and Atrus was revered in a similar fashion, which made him uneasy. However, the old man explained to Atrus the history of the Age and his people. When he ended the conversation, he stood up with difficulty, said that Atrus was expected sooner, and blessed the tree-dwellers who surrounded him and knelt before him, and then exited and threw himself down. A procession of tree-dwellers went down the nearest rope ladder and carried his body to the end of a short pier, which they cremated with some potion. During the funeral pyre the surrounding waters mysteriously changed to dull green, and by the next day expanded and remained permanently so.

The creatures paid much attention to Atrus and constantly offered him food or strange objects of affection. In the following 3 months Atrus learned some of their language. The creatures provided him with ink to write his journal. Eventually Atrus returned with Sirrus and Achenar (Catherine refused to follow) who went surprisingly well with the creatures and picked their language fast. Even when Atrus had to leave for Osmoian, Sirrus insisted to let them stay; Atrus reluctantly consented, with the warning not to take advantage of the respect the creatures had for them. Indeed, Atrus later found out that the boys were doing very well. The creatures were dismayed that Atrus left again, but were happy that his sons were staying again. During the following 3 days, the brothers constructed a boat with the creatures and explored the surrounding waters.

When Atrus returned, he said that he and their mother suggested that they should leave for a while. The brothers were made enthusiastic by their experiences and asked to return again, or visit explore some other Ages alone.[1]

When the brothers grew up to be evil, Channelwood was one of the Ages they plundered tyrannically, and they established themselves in palaces among the highest levels of the trees. It is made obvious that Achenar played as god and used an Imager to command the creatures, similar to how Gehn established a position as a god to the natives in the Riven. Achenar also tortured and slaughtered the creatures.[2] Achenar stayed in Channelwood when the brothers planned to trap Atrus, and Sirrus left him a message about destroying his Myst Linking Book.[3]

Channelwood was an example of natural balance and mutual dependence.[4] Originally the place was a vast island amid the ocean, populated by humanoids, and, in the trees above them, monkey-like creatures. The island was disturbed by occasional short rumblings (obviously by tectonic or volcanic action) randomly ranging from slight to heavy.[1]

Today everything in sight is covered by water, save a small rocky island. Originally, the water was constantly and slowly changing color; from deep blue to muddy orange and then to beautifully clear. However when the last human inhabitant of the Age died, the water's color stabilized to a permanent dull green.

From the water grows directly a whole forest of tall trees, traversed by many wooden passageways built just above the surface and go through the forest as far as the eye can see. Half way up the grand trees, 10 meters above the water, is the village of a monkey-like people, and can only be reached from the lower passageways by rope ladders. An enormous hut garnished with bright metals was the palace of their leader.[1]

The rocky island is occupied by a wind-powered hydroelectric power system in order to power elevators from the walkways to the trees.[2] It is unknown if the system was built by the natives, Atrus, or his sons. 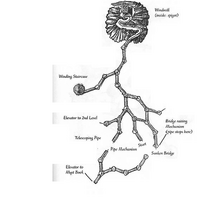 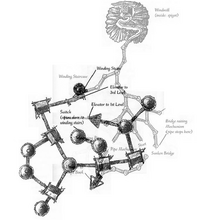 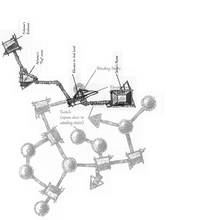 Third floor
Add a photo to this gallery

Achenars Projection Room
Add a photo to this gallery

Retrieved from "https://dni.fandom.com/wiki/Channelwood?oldid=8728"
Community content is available under CC-BY-SA unless otherwise noted.