Start a Wiki
Cyan Worlds, formerly Cyan, is the company responsible for creating the Myst series. It was founded by Rand and Robyn Miller, and is based in Mead, Washington. It's headquarters resemble D'ni ruins.

At one point, Cyan ran a website that contained, among other things, several journal entries made by Atrus that could not be found anywhere else.

Other Games by Cyan 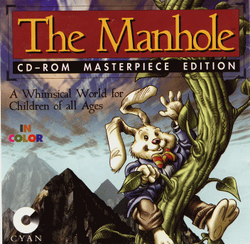 "The Manhole" was created in 1988. It is notable not only for being an excellent example of a game with a non-linear plot and marvelous graphics, but for being the first game ever released on CD-ROM. It also featured one of Robyn Miller's fantastic scores, which could be listened to by putting the CD-ROM into a standard CD player.

The Manhole was a fun world for children to explore in, but many parents enjoyed the game as well. The first release of the game was in black in white, but later editions used color. 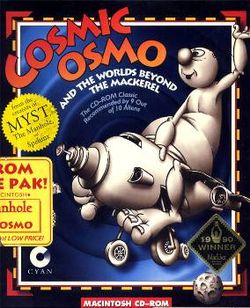 "Cosmic Osmo and the Worlds Beyond the Mackerel" was created in 1989 for the Macintosh computer line (Plus, SE, SE/30, II Series, Classic, LC). It won the 1990 Mac User award, and was later ported to the PC platform in 2007.

Like the Myst series, this game features a point and click interface. The player clicks on various elements in a scene to trigger events. To move between scenes and rooms, the player clicks on doors or near the edge of the screen.

The game begins when the player enters an animated spaceship hovering in front of the title screen. While inside the ship, he can trigger various events. The ship gives the player the ability to visit various planets. Aside from using the ship to move between planets, a complicated network of shortcuts exists between planets and scenes. The game, being presented in first person view, enables shifts from the macroscopic to the microscopic level. Most of the shortcuts are found at the microscopic level; through a water drain or a mouse's hole, for example.

Unlike the Myst series, Cosmic Osmo does not have a clear goal or puzzles to solve. Instead, it is simply an interactive world that can be explored at the player's leisure. Many of the foundations set by Cosmic Osmo would make their way into Myst, as well as several cameos. Myst mentions Osmoian as an age written by Atrus and 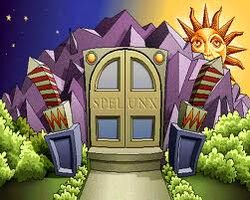 "Spelunx and the Caves of Mr. Seudo" was created in 1991. It has no real story, and is meant as a game to be explored and played with rather than completed. Other than the player, there are two main characters, Professor Spelunx and Mr. Seudo, who are pictured but never actually meet the player. Robyn Miller hand-drew all of the graphics in the game.

Obduction was released on August 24, 2016, and is a spiritual sucessor to the original Myst.

"Latus", formerly known as Yet Something Else, is a game that has been announced to be in production by Cyan Worlds. The game has reportedly been in production for quite some time, but very little information has been revealed.

Retrieved from "https://dni.fandom.com/wiki/Cyan_Worlds?oldid=8773"
Community content is available under CC-BY-SA unless otherwise noted.