The Mechanical age was one of the Ages written and visited by Atrus from Myst Island.

Atrus wrote this Age knowing that it would be different from the previous ones.

There was a beautiful walled city that rose up out of the water, between 3 enormous hills. Its people had anything they wished. However they were alone and had no means to travel on water, so they anticipated visitors from the east; for that they built a lookout post on the east hill.

Friendly visitors brought rumors of the Black Ships, an enemy beyond the horizon. One day the sky became as dark as night, and the black ships appeared, ignoring the lookout post's attempts at peace. The sentries were easily overwhelmed as the ships wreaked havoc on the city. The foundations of the city were destroyed, and it sunk deep into the ocean and only the lookout post remained. 8 people had hidden and managed to survive through the attack. It was rumored that in 10 years the enemy would return to finish the destruction. In the nine years 2 of the survivors had died.

When Atrus came, the sky was dark. He met a very ancient man (who reminded him of Emmit) who told him this story. As the next attack was expected soon, He decided to assist them and save that civilization. With the help of Sirrus and Achenar (who were now more mature) and 4 of the healthiest survivors, they built a fortress using the city's ruins as the foundation.

Atrus employed some holography technology he experimented before on Aspermere, to help the survivors learn to operate the fortress. While working, Atrus envisioned his next Age, Arimarl.[1] The boys were working on small projects of their own on the south island where most of the materials were stored. After 6 months of work, the fortress was completed and Atrus compensated for some small miscalculations with the holographic technology.[2]

Work finished just before the attack, which was substantial. Then weapons stopped and the ships turned away. On the night, the people celebrated with their ancient dances. Atrus decided they should not risk the complete victory over the Black Ships, and after their adventure they left, hoping to find a better world when they'd return.[2]

However, Sirrus and Achenar returned to do much more than everyone had ever expected; they were captured by the Black Ships pirates and were introduced to tyranny.[3] They made their palaces in the fortress and obviously slaughtered what little remained of them. Sirrus stashed alcohol and treasures and Achenar kept a hidden torture chamber.

Some underwater breathing gear was kept there. The brothers took them in order to work in Serenia.[4]

It was said by the survivors that the skies would be gray in Mechanical until the day the last Pirate ship sank beneath the waves. The skies of Mechanical were lastly seen quite blue.[5]

The Age consists of a vast ocean. Years ago there was a large city between 3 hills. The easternmost hill had a lookout post. Beyond that region, it is known that there were other peoples and civilizations.

Now the city has collapsed and the sea continues to rise. All that remained is a fortress built by Atrus over the city, and the hills were reduced to small islands.

An expanse of waters far from these areas is said to belong to the Black Ships. There is also a mention of Camder where Atrus kept his books.[3]

The sky was usually sunny, but after the collapse, it became dark and gray, with constant flashes of lightning in the distance. The bleak sky much dismayed Sirrus and Achenar. It was said that the storms would never end until the Black Ships were destroyed.[2] 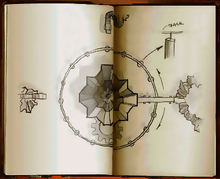 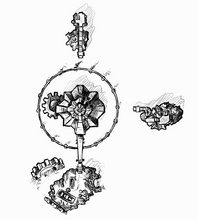 Sketch
Add a photo to this gallery

Achenars Secret Torture Chamber
Add a photo to this gallery

An inspiration for the Mechanical fortress was a D&D dungeon designed by Robyn Miller.[6]

According to an early concept map, the fortress was to have 2 bridges instead of one. In the interior, there would be two "Guard Rooms". The puzzle in the basement room ("Hub Rotator Room") to align the elevator walls in the "Hub Access Room", involved he alignment gear tooth number which was to be found in the Myst Library.

Retrieved from "https://dni.fandom.com/wiki/Mechanical?oldid=8997"
Community content is available under CC-BY-SA unless otherwise noted.