"Myst IV: Revelation" is the fifth game released for the Myst series, released on September 28th, 2004, a year after Uru: Ages Beyond Myst. It was developed and published by Ubisoft and is the second game in the series not developed by Cyan Worlds (the first being Myst III: Exile).

The game follows The Stranger as (s)he attempts to determine whether or not Sirrus and Achenar have reformed.

The game begins with Atrus writing a letter to The Stranger, inviting them to Tomahna and confessing that Sirrus and Achenar did not die when he burned their prison books as previously believed. Instead, he has imprisoned them within the ages of Spire and Haven in an attempt to reform them. Yeesha brings The Stranger back to Atrus, who asks you to visit the two prison ages and determine for yourself whether or not the two have reformed and are worthy of release. He then returns to Rime, where he becomes trapped due to an electromagnetic storm. The Stranger then begins exploring Tomahna and is knocked out by a mysterious blast and awakes later after nightfall, with no sign of Yeesha anywhere. However, (s)he does find an amulet, which contains the power to view an object's memories, which shows Yeesha running from an unknown individual.The Stranger then finds the linking books to Haven and Spire.

In Haven, Achenar's prison,  (s)he then learns that Achenar has adapted to the primitive lifestyle, learning the jungle and how to hunt and even befriending several of the creatures. However, (s)he also finds no sign of Achenar within the age and finds evidence of him breaking out of Haven and accessing the Tomahna linking book.

In Spire, Sirrus's (s)he finds evidence that Sirrus was using his scientific knowledge to manipulate the floating rocks in hope of finding a way out of the age. However, he has also found frequencies that cause the minerals in the area to vibrate and has used it to create Nara bombs (of which he used to collapse the bridge earlier in the game). Again, The Stranger finds no evidence of Sirrus in Spire, though evidence suggests he used a Nara bomb to gain access to the Tomahna linking book.

Upon returning to Tomahna from the first age visited, The Stranger finds Achenar, who links to Serenia, having stolen the linking book from Yeesha's bedroom. The Stranger can then choose to either follow him or visit the second prison age.

In Serenia, (S)he finds evidence in the age that suggests Yeesha was kidnapped by the two brothers. (S)he finds Achenar in the age, but he quickly runs off before (s)he could confront him. Upon further exploration, The Stranger runs into Anya, one of the protectors of the age, who informs you that she has not seen Yeesha, though she fears she may be in trouble and goes to gather the rest of the protectors. She then suggests you visit the Memory Chamber, a place that holds all the memories of the protector's ancestors. After a short walk, the player encounters Sirrus, who is gathering empty memory globes with the harvester. Unfortunately, he notices The Stranger and blows it up with a Nara bomb, running away in the confusion.

At the memory chamber, The Stranger finds more evidence that Sirrus and Achenar have kidnapped and trapped Yeesha, trapping her in the memory removing chair that they intended to use on Atrus to learn The Art. Upon leaving, another protector explains that they use the harvester to gather empty memory globes for the Memory Chamber, which in turn preserves the memories of their ancestors after they die. Without the harvester, they cannot gather memory globes and the process will remain at a standstill. She suggests that The Stranger should visit the Hall of Spirits, where several protectors are gathered to learn of Yeesha's fate in Dream. Another encounter with her explains that there is a spare harvester near a different Memory Chamber, which was abandoned due to the toxins growing to fatal levels (a natural occurence when the plant grows old).

The Stranger then runs into Achenar, who has just stolen the Life Stone, an integral part of the Memory Chamber that will eventually cause it to collapse when removed. He explains that, though it looks bad, he's only stealing it to stop Sirrus, whom he claims is crazy and has kidnapped Yeesha and will return the stone when he is assured Sirrus' plan has failed. He begs him/her not to bring Atrus, as Sirrus wants to kill him, and points The Stranger to his old journal which details their plan before running off. The Stranger runs into a third protector, who suspects him/her of stealing the Life Stone and tells him/her to prove his/her innocence by finding it and alerting the other protectors in the Hall of Spirits. A fourth protector in the Hall of Spirits mentions that they went to Dream looking for answers, but the spirits did not make sense to them and tells The Stranger that they must go to Dream himself/herself, though they need a spirit guide first or will perish in Dream, being unable to return. Depending on the player's actions, The Stranger becomes a child of one of three possible elements (Water, Wind or Fire). (S)he then finds the spirit guide that matches their element and gives them the appropriate offering and returns to the memory chamber, where (s)he explores Dream. His/her guide meets them in Dream and mentions that a powerful spirit is unable to return to the waking world then offers to help The Stranger if they can solve a puzzle first. After solving it, (s)he is given a cryptic color combination and returned to Serenia.

Upon exiting the memory chamber, the player runs into Anya again, who has returned to guard the Memory Chamber and block all access to it. The Stranger then runs into Sirrus outside the second Memory Chamber. He lies to The Stranger and tells him/her that Achenar has kidnapped Yeesha and will kill her unless he helps him steal all of Serenia's treasure. He explains that he only destroyed the harvester to stop Achenar from poisoning the Memory Chamber, as his solitude on Haven made him go insane, and Achenar only wants to destroy everything. He commands The Stranger to return to Tomahna to fetch Atrus, as Achenar is afraid of him and then shuts and locks the door to the second Memory Chamber.

The Stranger then unlocks the door beneath the second Memory Chamber using the color combination, which leads inside. (S)he finds Sirrus inside a steel coffin and Yeesha tied to a steel chair. She begs The Stranger to pull the lever and release her before Achenar comes back to kill them both. As (s)he goes to release her, Achenar runs into the room with a crossbow and tells him/her that Sirrus removed Yeesha's memories with the chair and implanted his own within her with the intent to trick Atrus and Catherine into teaching him The Art. Sirrus (as Yeesha) protests, calling him crazy and proclaims that Achenar killed Sirrus while he stole the Life Stone. Achenar admits he stole it to stop him from hurting Atrus but didn't realize he was planning on using Yeesha instead of Atrus. He then begs The Stranger to pull the amber lever instead of the silver one so that everyone's memories will get straightened out. Sirrus (as Yeesha) protests that it will kill her and Achenar begs you to pull it before the Memory Chamber loses all it's power (from him stealing the Life Stone).

In the first bad ending, The Stranger pulls the silver lever, releasing Yeesha, who then pulls a lever that collapses the ceiling, killing Achenar and knocking The Stranger unconcious. When (s)he awakens, Sirrus (as Yeesha) is standing nearby with Achenar's crossbow, gloating at how perfect his performance is and how he'll be able to trick Atrus and Catherine into teaching him The Art then kill them too. He then kill the Stranger with the crossbow.

In the second bad ending, The Stranger waits too long and Achenar leans closer to beg The Stranger to trust him. Sirrus uses this opportunity to steal Achenar's crossbow and kill him with it. He again gloats about his performance and kills the Stranger with the crossbow.

In the good ending, The Stranger trusts Achenar and pulls the amber lever. Sirrus protests, saying that his performance was perfect and swears revenge on Achenar before falling unconcious. Achenar is surprised and admits something has gone wrong as the Memory Chamber trembles, its death imminent. Achenar explains that the Memory Chamber is close to dying and that without it, Yeesha is doomed. He tells The Stranger to visit Dream while he uses the Life Stone to stall the process. The Stranger then returns to Dream, where his/her spirit guide explains that Yeesha is unable to return to Serenia, as her connection to her body was prematurely severed. He then brings The Stranger to Yeesha, where an interloper (Sirrus) is clinging onto her to survive, since he does not have a spirit guide and would die in Dream. He remains hidden from her, however, as he is scrambling their common memories, confusing her as to whom these memories belong to. The guide suggests you sort them out yourself, which would stun Sirrus long enough for Yeesha to go free.

After sucessfully unscrambling their memories, Sirrus unlatches himself from Yeesha, who returns to her body, and Sirrus drifts off into Dream, unable to return to Serenia and dies. The Stranger returns to Serenia, where Achenar, short on breath, congratulates you and explains that he had to insert the Life Stone directly into the plant, breaking open the glass and releasing the deadly toxins. He explains that it was for the greater good and expresses regret for his past actions. He reassures Yeesha and then dies in her lap.

Atrus thanks the Stranger and assures him/her that Yeesha is alright and expresses his sadness and regret over Sirrus and Achenar's deaths. He promises to devote more of himself to Yeesha to give her the best upbringing she could possibly have. 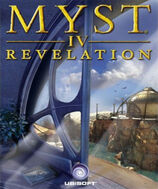 Inside Cover
Add a photo to this gallery

Retrieved from "https://dni.fandom.com/wiki/Myst_IV:_Revelation?oldid=8608"
Community content is available under CC-BY-SA unless otherwise noted.