Narayan was an Element Age written by Atrus to teach his sons the concepts of the Art. It was specifically conceived as a culmination of all learning gathered by the students, teaching Atrus's fourth and central principle that "balanced systems stimulate civilization".

Native humans managed to survive thanks to a precarious, carefully managed symbiotic relationship between 2 life forms, the Lattice Trees and the Puffer Spores, which allowed them to build their structures and civilization. The rigorous discipline of constantly tending the Tree, developed into a ritualistic set of traditions and ceremonies. Narayani civilization became tradition-bound, as their existence depended on this.

Previous generations had experienced minor disasters due to faulty maintenance; the Narayani Elders who witnessed these came to understand the underlying significance of these traditions and insisted on them.[1]

Atrus visited Narayan for 2 months[1] and was taught by Saavedro about their customs. He sent his sons, Sirrus and Achenar to complete their studies and learn how civilizations bring balance to an Age.[2] When he returned to lead them home, he didn't suspect the negative impression they left.[1]

Narayani society had started to experience a generational gap. Factions of younger Narayanis who didn't understand the significance of the heavy ceremonial duties, questioned them and distanced from the Elders.[1]

Return of the Brothers

5 years later Sirrus and Achenar returned, now as young men, decided to plunder the Age by exploiting its fragile balance.[1] They questioned why the Narayani have to work so hard, and showed their father's Linking Books with other worlds where people could live without it. To others they lied that they mastered the Art and could "fix" Narayan so they could survive easily. They systematically blamed their father, "the Creator" who wrote Narayan to be unstable and merciless, with doomed natives to endless toil, just to teach his sons how an Age should not be. They asked to arrange a meeting with the Elders, but they refused to believe them, saying that abandoning their traditions, the Tree will die with them.[2]

The brothers perceived a discord in society, and promised to help, but only if all inhabitants, including the Elders, concurred with them. The brothers knew that this would never happen.[1] They were more successful to the young people who didn't want to listen to the Elders. They approached the most dissatisfied men and secretly orchestrated malcontent against the Elders, the rituals and traditions. Youths screamed that they didn't want to sacrifice their lives to the Tree, as the Elders had done before them, while the brothers secretly enjoyed the confusion they were creating. They sowed discontent and encouraged unrest and violent resistance; they led gangs of young, boycotting the rituals. Small insurrections led to larger riots; the fighting tore the people apart and led to civil war.[2][1]

The brothers miscalculated how badly the chaos and disruption could endanger the civilization;[1] The Tree was neglected during the clashes; its roots were overgrown and became black. The branches were strangling and the steams turned the buildings red. No one was there to guide the spores to the branches, they floated up and they burst in the hot steam.[2] Soon the latticework structures began to degrade and structural failures decimated several villages.[1]

While the Age was collapsing, the brothers salvaged all they considered worthy. During a nasty riot the brothers were almost arrested by Elder loyalists, and they escaped Narayan.[1] Saavedro followed them to J'nanin to bring them back but they left him there to die. Saavedro managed to link back to Narayan, but he was closed inside the ice shield as he didn't know the fourth tenet-code to open it. Through the ice-shield he could make out only drifting fragments of the Tree. Fearing for total devastation, he decided that his people and family were dead.[2]

When the Stranger opened the outer shield, Saavedro realized that his people were not dead. He trapped Saavedro between the two shields, forcing him to return the book of Releeshahn. He then released Saavedro, who went to reunite with his family after giving a sign of thanks.

Narayan is a water world; above its oceans there is an orange-pink layer of eternal mists and clouds in which a unique ecosystem thrives. The water, as well as its vapors, has special properties.[1] The sea flows through gaps around the Age. From the rifs of the waterfalls steam flows up and puffer spores soar upwards.[2]

Geothermal vents roam below the water, enriching it with mineral sediment. This encourages the growth of "Lattices" around the vents, that rise above the sea of mist. The vents also emit hot carbon gases that enrich the puffer spores that descent down there, reinflating them; as they ascent to the surface, they release oxygen to replenish the Narayan atmosphere.[1]

The humans of this Age, the Narayani, live on semi-artificial gigantic Lattice Trees on which they build their structures and buildings.[2] It seems that several Trees/cities were connected by wires on which a gondola glides. Lattice-tree pylons thread the mist to connect structures.

Atrus used technology to control the geothermal vents and harvest power. He also managed to control the properties of water (comparable to the water of Riven) by using special crystals imported from Amateria; the natural harmonics of a crystal excite the water molecules in the mists, causing them to bond around it as a perfect sphere of impenetrable ice.[1]

A lattice-tree structure serves as a linking chamber where Atrus installed 2 Amateria crystals that form a translucent ice shield around the whole building. It also houses a large cylindrical generator powered by the geothermal vents; sending a current to either crystal, it stabilizes it, dissipating the shield.[1]

A billowing organic-looking structure with translucent walls through which dark veins run. Pillars, stairs and support beams are formed by thick roots that twist and fan out across floor and ceiling. It houses a generator that draws geothermal energy, and 2 crystals. Atrus's sons had to display knowledge of the principles they were taught in order to turn off the shields and meet with the Narayan people.

A metallic platform build on top and between the organic spore sacs and root lattices. The floor is a round grate through which orange mist glows revealing the geothermal energy channeled up the core. A metal towering building of unknown purpose (perhaps warehouse or quarters) is topped by a blue glowing crystal which generates the ice shield that isolates the whole structure from outside. 2 rows of electrical circuit coils form the power core, and nearby is the handle to activate the power core below. Metallic stairs lead to the level below.

A split-level chamber which is powered by the generator above. A metal stairway leads to the roof while a doorway leads to an outside platform, but is blocked by an ice shield caused by a crystal installed outside. Provided that the system is on, a system stabilizes the crystals and melts the shields; the 2 podiums are the consoles for the Inner and the Outer Shields, covered by a metal hatch. In each of the 3 "clusters" on the Inner Shield Console, one has to assemble a symbol comprised of 4 Narayan glyphs that translate to the Age-building tenets taught by Atrus. Once the Inner Shield Console is working, one can feed the Outer Shield Console with the fourth tenet; provided that the console is powered, the outer shield can dissipate, but Saavedro never managed to do it as he didn't know the tenet. A Router Switch between the podiums points to the one it sends power, stabilizing the crystal (only one at a time) and melting the shield; by turning the switch, each shield is raised while the other is melted.

The lowered part of the room has an organic-looking bulbous mass behind which is the link-in point; and a wall where 5 pairs of red tapestries are hung, embroidered with Narayani glyph-words. A set of tapestries has been torn by Saavedro to make his robe.

The small Inner Shield Crystal from Amateria is embedded in the floor of the gondola platform just outside the doorway, forming the inner shield that blocks it. The platform houses the gondola-like Glide Ship that rides a cable to other pylons, provided that the outer shield is dissipated. Stairs lead to the bottom floor.

This is a room similar to the one upstairs, with 5 pairs of red tapestries behind a bulbous mass or device. These tapestries provide two important glyphs for the 4rth tenet. Saavedro also has left there his linking book to Tomahna which he used on his expeditions to spy on Atrus. 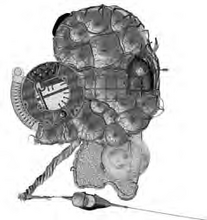 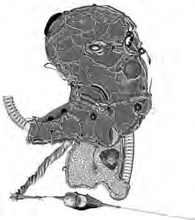 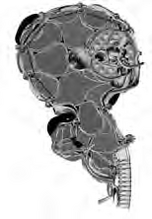 Linking chamber lower level
Add a photo to this gallery

Retrieved from "https://dni.fandom.com/wiki/Narayan?oldid=8882"
Community content is available under CC-BY-SA unless otherwise noted.