"realMyst" is a realtime 3D version of Myst that was released on November 15th, 2000.

Unlike the original Myst, which used pre-rendered stills as the primary means of exploration, the graphics are fully rendered, which allows the player to fully explore the world without restraint. It is the first ever realtime 3D production by Cyan, with other titles in 3D including the Uru series and Myst V: End of Ages.

In addition to the content of Myst, various little things were added or enhanced to add to the realism of Myst...

As realMYST is merely an updated version of the original Myst, the plot remains mostly the same. The Stranger finds the Myst linking book at the bottom of the Star Fissure and unexpectantly links to Myst Island. The Stranger then finds two prison books, a red book which contains Sirrus and a blue book which contains Achenar. Both beg The Stranger to explore the ages of Stoneship, Channelwood, Mechanical and Selenitic and bring back the pages that match the color of their book.

The Stranger also finds a message from Atrus to Catherine, mentioning that one of their sons burned all but four of the linking books in The Library. He also notes that he hid the remaining books. After exploring the ages, The Stranger finds the pages and brings them to the prison books. Sirrus blames Achenar for burning the books, claiming that he is crazy and is bent on destruction, breaking the trust that Atrus gave them when they became adults and that Atrus trapped them both since he couldn't tell who was lying and who was telling the truth. Sirrus fears that their father has died since and he will forever be trapped in the book.

On the other hand, Achenar claims that Sirrus burnt the books and killed all the inhabitants, due to his lust for power and riches. He also proclaims that Sirrus killed their father and will kill you if you release him. They both mention pattern 158 in a burnt book and to use it in the fireplace. There, The Stranger finds the final two pages of the game as well as a green book, which Sirrus and Achenar both plead not to touch, as it will trap The Stranger in another prison book. If the player brings back the red page, Sirrus swaps places with The Stranger, then gloats about being free and tears out the pages of the red book, trapping The Stranger in it. He then retreats to find Achenar. A similar scenario happens when bringing back the blue page to Achenar. The Stranger swaps places with him, and Achenar giddly rips out the blue pages then seeks out Sirrus.

However, if The Stranger ignores their pleas and uses the green book, they find Atrus trapped within it, who begs the player to find a white page to complete his Myst linking book. He informs him/her that his sons tricked him into visiting D'ni and removed a single page from his linking book, trapping him there. He promises, should the player free him, that he will right the wrongs Sirrus and Achenar have done. If The Stranger visits the age before finding the white page, an irritated Atrus informs him/her that (s)he is a fool and is forever trapped in D'ni with him. If (s)he brings the white page, he returns to Myst and burns the two prison books, "killing" his two sons (though it's later revealed in Myst IV: Revelation that he transfered Sirrus and Achenar to Spire and Haven). He explains that he's fighting a much greater foe (Gehn) and cannot stray from his writing (fixing Riven). He then offers The Stranger the freedom to use the contents of his library until the day should come where he needs him (setting up the events of Riven).

In an added bonus, the Rime book is on the floor when the player returns and contains new information on how to unlock the age. Though the age is short, it better connects Riven to Myst, a new journal mentioning how Atrus learned to use crystals as a means of viewing an age, which was coincidentally Riven.

An updated version of realMYST, called RealMyst: Masterpiece Edition, was released in 2014. 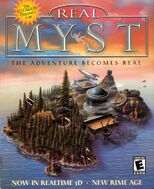 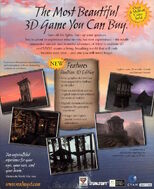 Inside Cover
Add a photo to this gallery

Retrieved from "https://dni.fandom.com/wiki/RealMyst?oldid=8537"
Community content is available under CC-BY-SA unless otherwise noted.