Relto is your "home base" in the Uru series. Written by Yeesha as a gift for Atrus and Catherine, it was meant to be a replica of Myst Island. It is different from any other age in the series in that it has the ability to change its appearance throughout the game. In Uru, you can find multiple "Relto pages" throughout the game. These pages, when added to the Relto book add certain features to the island.

Relto is a somewhat barren age that consists of a small island surrounded by clouds. Explorers have their own small hut in the middle, which contains a bookshelf for linking books and Bahro stones (which become available after linking to them once), a dresser, a bed and a second smaller bookshelf which contains journals. It also has a small tree growing just outside the hut.

Though Relto is barren at first, players can find Relto pages that add features to the age, such as waterfalls, distant islands and even rain. These features can be activated or deactivated at any time, allowing explorers to have their own customized Relto age. Relto was written by Yeesha to be similar to Myst Island. As such, many landmarks are in similar locations to where they were on Myst. The hut assumes the position of The Library, while the tree outside is in the location of the tree leading to Channelwood's linking book. Players can also add a dock with a Relto Page, which is in the location of Myst Island's dock that harbors the ship containing the Stoneship linking book.

There are many oddities about the Relto age that make it unique.  The first is that each person who owns a Relto linking book links to their own personal version of the age, unlike normal linking books that link everyone to the age in the Descriptive Book. It is confirmed that this is not merely for gameplay purposes in Uru: To D'ni, where Explorers can link to both their own Relto age as well as Phil's Relto age, which is more customized than the player's.

The second oddity is that players retain their linking book to Relto, even after linking there. When linking normally, a person retains all their possessions but leaves the linking book behind. However, when linking to Relto, the book links with the person.

The third is the ability to link to the age within the age. This is stated by the D'ni as an impossibility, however, an explorer can link back to within their hut at any location within Relto (or any age).

The fourth is the ability to add "Relto Pages" (pages with symbols on it), which alters the age in different ways depending on the page and can be deactivated at any time from within the book.

These impossibilities are explained in the ending of Uru: Ages Beyond Myst, where Yeesha states that her ability as a writer has surpassed even her own father and she has even found ways around the limitations of The Art, which she proves by making it rain in The Cleft.

Relto can be customized with several pages known as Relto Pages. These pages are scattered throughout the ages of Uru and must be found. Each page contains one Relto customization that can be activated or deactivated at any time. Below is a list of Relto pages and what they do.

Uru: Path of the Shell 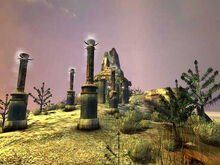 Add a photo to this gallery
Retrieved from "https://dni.fandom.com/wiki/Relto?oldid=8741"
Community content is available under CC-BY-SA unless otherwise noted.