Riven: The Sequel to Myst

"Riven" is the second game in the Myst series, and the fourth chronologically. It was released on October 31st, 1997 by Cyan, after four years of development.

It takes place in the Riven, a collapsing age, which is where Catherine comes from. In it you must enter Riven, free Catherine, trap Gehn and signal Atrus. In this game we also see Gehn's "Age 233" and the age of Tay.

Spoiler warning: Hints, solutions, and/or spoilers follow.
Several months after the conclusion of Myst, Atrus asks The Stranger for his/her help (which was earlier mentioned in the ending of Myst, but never fully explained) and sends him/her to Riven to free Catherine and capture Gehn. He hands him/her a Trap Book, disguised as a link to D'ni, and his journal and explains that he can't send you in with a way out, otherwise Gehn could potentially escape if (s)he fails. He asks him/her to signal him somehow and sends him/her to Riven.

The Stranger links to Riven, but falls into Gehn's trap to imprison anyone who enters the age. Soon, (s)he is interrogated by Gehn's Guard (who is instructed by Gehn to question newcomers in D'ni, but forgets and talks to them in Rivenese). He steals the book from The Stranger and is about to link when he is knocked unconscious by a Moiety rebel, who steals the book themselves and drags Cho off. The Stranger is then allowed to explore the age at their leisure.

After solving a puzzle on Jungle Island, The Stranger finds a Linking Book to Tay, the home of the Moiety rebels. Before (s)he can explore it fully, (s)he is knocked out by a rebel and imprisoned within one of the buildings. Shortly after, Nelah enters the room and speaks to him/her in Rivenese before returning the trap book and Catherine's journal, which contains the random combination for the manhole on Temple Island. She leaves and returns shortly after with a linking book back to Riven.

After more exploring, The Stranger manages to power up the Fire Marble Domes around the age and opens them. Using another randomly generated code (this time from Gehn's journal on Crater Island), The Stranger opens a lock to a linking book and links to Age 233. Again, The Stranger links into a cage and is met by Gehn, who attempts to convince you of his regret over his past actions and his change of heart and wonders aloud that he wishes to see Atrus before he dies. However, Gehn finds The Stranger's trap book and reads it, though he grows suspicious. He asks him/her to link through it first to prove his/her intentions are good. Gehn then sets the book down and powers up his linking books, allowing The Stranger to link to any of the islands on Riven, including Prison Island (which houses Catherine), before leaving him/her alone.

The Stranger can then link to Prison Island, where (s)he can meet with Catherine. Catherine is excited to see him/her, but realizes that Gehn is using The Stranger as a trap and fakes disappointment and frustration, casting him/her away after telling him/her to meet back with her after trapping Gehn. The Stranger then returns to the 233rd age, where Gehn expresses his shock that (s)he returned. He offers the trap book to him/her again, which (s)he links into. (S)he then watches as Gehn cautiously links in himself, freeing him/her from the book and trapping Gehn. (S)he is then free to explore the age, having been freed outside the cage.

The Stranger then returns to Prison Island and uses a random code found in the 233rd age to free her. She is excited to see Gehn is trapped within the book and takes it from him/her. She then asks him/her to open the Star Fissure to signal Atrus and tell him/her that the code is within her journal before leaving to warn the Moiety.

The Stranger returns to the 233rd age and finds all the linking books torn except for the Temple Island page. (S)he returns to the island and to a large telescope and manhole found near the Link-in point and uses the code from Catherine's journal to open the manhole and lower the telescope into it. This causes the Star Fissure to re-open, pulling in everything near it and starting the collapse of Riven. Atrus links in and meets up with The Stranger and Catherine and sees the prison book, which contains Gehn. He thanks The Stranger for "giving him his life back" before linking back to Myst Island, leaving The Stranger to fall into the Star Fissure, which Atrus hopes returns him/her back home (though we find out later in Uru: Ages Beyond Myst that it actually leads to The Cleft).

Like Myst, Riven features several alternate endings, which appear at different times in the game.

This is the largest age in Riven in terms of explorable space. It consists of five islands, four of which are interaccessible by means of trams or bridges. The fifth is only accessible via linking book.

This is the age where you first meet Gehn. It is so named because it is Gehn's 233rd try at making an age, and even his 233rd try is unstable and barely habitable.

This is the headquarters of the resistance effort against Gehn. It consists mainly of a large tree, with houses inside.

The game contains a soundtrack, again composed by Robyn Miller. 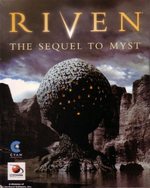 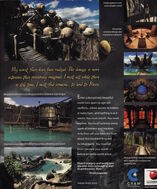 Back Cover
Add a photo to this gallery

Retrieved from "https://dni.fandom.com/wiki/Riven:_The_Sequel_to_Myst?oldid=8939"
Community content is available under CC-BY-SA unless otherwise noted.