Selenitic is an Age written by Atrus.

The Age was an uninhabited island. When Atrus linked to the Age, he found a lush and green landscape and enjoyed the silence, but a mysterious hot wind gave him a strange feeling that he was not welcome. He slept on a green hill, but he woke up by terrible shaking in the ground and explosions as fiery meteors fell from the sky.[1]

Atrus returned 3 months later (bringing a new Linking Book as the one left behind would have been destroyed) and found a brown and barren land. Despite this, he enjoyed the various sounds that constantly flew through the air and explored to find their origins.[1]

One night Atrus awoke by a hissing sound and heat and soon after he witnessed a roaring, wide chasm opening nearby. He considered harnessing its energy and, despite the heat, he reached a newly-created cave, an entrance to a vast underground cave system deep into the crust. He left and then returned with tools for his plans to explore the underground and, thanks to the abundance of raw materials, he didn't need more.[1]

In the following year, Atrus begun working, he built bridges, a rocket ship, an Antenna detecting sounds, rails spanning inside the cave mazes, a Mazerunner designed according to D'ni technology (and help from Sirrus),[2] and others. On that Age Atrus employed one of his most prized inventions. During that time Sirrus and Achenar were spending time alone in Channelwood. He copied many of his construction notes in another journal. After about 18 months being there, the Age had stabilized. While leaving, Atrus considered visiting another Age which would provide answers to Selenitic's mysteries.[1]

Atrus returned to Selenitic in order to bring over some of the machinery left there, in order to use them for his constructions in Rime.[3]

It was one of the few Ages that survived Sirrus and Achenar's wrath, probably because there was no civilization to exploit.

While writing Releeshahn, Atrus revisited the Age, and felt the same disturbing feeling as always.[4]

Selenitic is an uninhabited island on a shallow planetary crust. At first it formed a beautiful landscape with a grassy hill above green fields, a few scattered forests and a large lake. In the north there was a chasm whence an uncomfortable hot breeze came to the south. The sky had a few white clouds and the sunset was spectacular with oranges and reds. During night reds still were seen beyond the horizon that blended with the black of the sky.[1]

After the cataclysm, it became a barren land, with scattered gigantic craters. The meteors pierced the shallow crust and set off a period of volcanic activity. The cataclysm did not affect the grassy hill, which remained as a grove with a stream, an oasis among the barren desert. The lake was dried up, but one of the meteors created a large gulf with a rock jutting out of the center of the lake. The northern hot wind turned into a pleasant breeze. Despite lacking features, the environment was rich in sounds: streams, whistling winds, fiery chasms, the sound of wind whistling through peculiar crystalline formations. Later, near the oasis, fires came from the ground and a tumult opened a fiery chasm, revealing a vast system of underground caves. The raw materials were abundant, mostly iron and titanium.[1]

From the start Atrus believed that the energy of the Age was unfocused, as if it was in war with itself.[4] He observed that the Age hid many mysteries, one of them that a large portion of the writings in his journal about the Age had vanished, but, despite his best efforts to discover why, Atrus could find no explanation and simply accepted it.[1] 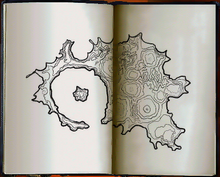 Map of the Selenetic island before any structures 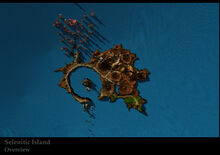 Overview from Making of Myst 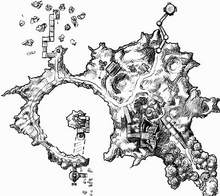 Sketch
Add a photo to this gallery

The Mazerunner
Add a photo to this gallery

In an early concept map of the Age, the Age would be visited by the same Spaceship that exists on Myst. Once the player arrives, the Spaceship is not powered is therefore dead (in the final game, the Selenitic Spaceship is just an inoperative replica of Myst Island's).

The Linking Book on this Age was originally intended to be housed in a complex underground maze of overlapping catwalks and ladders suspended over an enormous chasm. Like the maze in the final game, this too would make use of sounds to direct the player to the correct direction. In the early conception, the maze would end to the Myst Room with the missing pages and the warp area to the Myst library.

However due to the vastness and complexity of the maze, the rendering time would be prohibitive due to the technology of the time, and so it was replaced with the Mazerunner.[5]

Retrieved from "https://dni.fandom.com/wiki/Selenitic?oldid=8730"
Community content is available under CC-BY-SA unless otherwise noted.