Emmit, Branch, Will and others

Atrus wrote the Stoneship age early while he was living on Myst Island.

Emmit was the first inhabitant of the Rocks who lived in a cave in the largest rock, and swam between them. he was joined by Branch; the two became friends and hunted fish together, and Branch found a cave in the same rock as Emmit. One day Branch found a third boy, who apparently had no name, and joined the group. He was named Will by Emmit. They seemed to have little concern about how they got there. The boys seemed to know nothing of civilization.

Atrus wrote the Age as a group of rocks in the middle of the ocean. When he appeared in the world, he surprised the 3 boys, but by that night, they became good friends. It seems that the Age's creation and/or Atrus's arrival triggered some strange phenomenon, as the next morning, as Atrus was sitting under a tree, it rained for the first time, which lasted for an hour. The boys were afraid, and Atrus attempted to explain to them that it was not harmful.

That night, he promised a surprising change. Wishing for a means to explore the Age, Atrus linked out, and attempted to write a boat in it, testing the limits of the rules of the Art. However Atrus was not yet experienced enough; so something went wrong and the ship was merged with one of the rocks and broke in half. Nonetheless this mistake helped Atrus understand some of the principles of the Art he had no answers for. The boys enjoyed it and played around it. It also offered a stable platform from which Atrus studied the Age, its solar system and the constellations of the night sky. He also noticed glimmers of light from the horizon which he suspected were other additional people on far off islands or rocks.

Just as the boys were getting used to the light rains, a small storm inexplicably arrived which frightened them with the thunder and lightning. Atrus left and returned with construction material in order to build a lighthouse whose light would flock people. Neighbors would be discovered from beyond the horizon and contact established.

The boys helped Atrus immensely. After more than 3 weeks of work (and some small alterations due to the instability of the rock they were building on) the structure was complete, and the boys were impressed by their own work. That evening they powered the generator (which frightened them) and Atrus slept in the top while the lighthouse shined a light for hours.

Will noticed a girl swimming towards them, and then a man and Emmit was happy. So was Atrus for helping an Age to evolve with his achievements and proceeded to explore a new, oceanic Age.

While Atrus was absent, the boys grew up and a new civilization formed and flourished. They discovered new materials, including gold. They also tried to keep the lighthouse in perfect condition (although the rock it was built on sunk 40-50cm). Rains continued for another 4 years but then they stopped and the cool breezes were back.

After 10 years of absence, Atrus returned to visit his old friends and was amazed at the changes. The people were content and served Atrus with new foods and showed him their discoveries. Before leaving he wondered aloud with them what things will be like in another 10 years.[1]

However it seems that Sirrus and Achenar plundered the Age, and eventually it was deserted. Stoneship's fair weather was replaced with constant storms and rain. The lighthouse had sunk enough that most of it, with exception of the top floor, and a landing just below, were underwater.[2]

Atrus wrote this Age as Rocks describing a world covered in water as far as the eye could see, but the area around Atrus' link site featured several rocks jutting up from the water. The largest of these contained a cave. Other lands and peoples existed beyond the horizon, who eventually visited The Rocks.[1]

The weather was just right; sun always shone brightly but a cool breeze blew from the north, never allowing the air to get too hot. The water was always so dazzlingly clear, that the deep ocean floor was visible. Rain never visited Stoneship until after Atrus came to the Age. Then, the occasional storm would rise up, scaring the boys greatly. The Age derives its current name from a ship which Atrus attempted to write into the Age. This ship led to the caves that later became the bedrooms of Sirrus and Achenar. 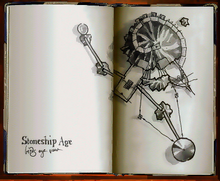 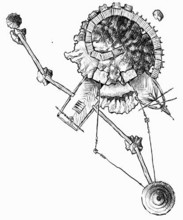 Underwater stairwell with a linking book back to Myst Island.

In an early concept map there were several differences. The telescope puzzle does not include finding the beacon of the lighthouse, but a red flag. There is no Umbrella Crow Nest but a "Pump-box" and the rear end of the aft.

Community content is available under CC-BY-SA unless otherwise noted.
Advertisement