Tomahna was the home of Atrus, Catherine, and their daughter Yeesha, on the surface of Earth close to the general area of the Cleft and thus close to the Great Shaft and the D'ni City deep below.[1]

The events on Myst Island created painful memories that Atrus and Catherine wanted to escape from. Atrus relocated his family to Tomahna after his failed restoration of D'ni and after he finished writing Releeshahn.

Saavedro, who had been stranded in J'nanin, gained access to Tomahna through a Linking Book Atrus left behind. For a long time he stalked Atrus and read his journals in his study room. After careful planing, Saavedro finally took his revenge by stealing the linking book to Releeshan and burning Atrus' study room.[2]

About 10 years later, Sirrus linked to Tomahna and abducted Yeesha.[3]

Tomahna was built in a secret canyon near a running river; a waterfall powered the structures by the means of a waterwheel.

Catherine introduces the player to the view seen from the sunroom, but as the Stranger likely traveled to this place directly, not through linking, they would already have seen the view before, albeit from a different angle. Alternatively, Catherine's statement implies that Tomahna was considered to be a separate Age during the game production.

In Myst IV: Revelation, we are introduced to a different part of their home, surrounding a lake close to a waterfall. It is unknown whether this part had been there before or was newly added.

Not much is known about Tomahna when Yeesha was an infant. It's possible that it was much smaller than the complex appearing in Revelations. The visible locations included a circular Sun Room overlooking a "breathtaking" desert vista, with hanging and growing plants under a glass dome with iron frames. The Sun Room had access to the couple's private quarters and Atrus's Study where he kept the Descriptive books of Riven and Releeshahn, its walls adorned with tapestries depicting the gathering of the D'ni survivors. When the Stranger first came to Tomahna, he waited for his host there; Catherine did not allow the Stranger to enter the couple's private quarters

Tomahna is initially approached by a tram that gives a spectacular overview of the area, passing through a tight spot and with an area that has a gorgeous view of the entire complex. The tram stops at Atrus' laboratory. From the lab, an elevator descends to the medium living level, which contains a greenhouse, Catherine's laboratory, and the bedroom of Atrus and Catherine. If the lab elevator is taken downwards to the lowest level, it goes across the lake and leads to the bedroom area. There is a swinging bridge that leads across the lake to the kitchen and Yeesha's bedroom. From the experiment lab, a door leads to the sunroom and Atrus' office. 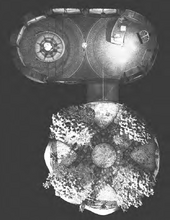 Sun Room and Atrus's Study
Add a photo to this gallery

The water wheel that powers Tomahna.

The linking book chamber to Haven and Spire.
Add a photo to this gallery

Retrieved from "https://dni.fandom.com/wiki/Tomahna?oldid=9067"
Community content is available under CC-BY-SA unless otherwise noted.